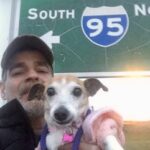 Reason for nomination: My dog, Dixie, went missing in August 2019. Someone found her and took her to Scott at SoCo Rescue. She stayed with him (as Ms Aggie) a while until she was taken to New Jersey for adoption which was incredible being that she was an older dog of over 12. 5 months after she went missing, We just happened to see her picture on a website that featured local rescue dogs needing adoption. We were ecstatic until we found out she was with a family in New Jersey. Scott went above and beyond to bring her back home to us in GA. She is now battling melanoma and we only have months left to be with her and we are so very thankful to Scott for the time we have left with her now. We will never forget you Scott! ❤️